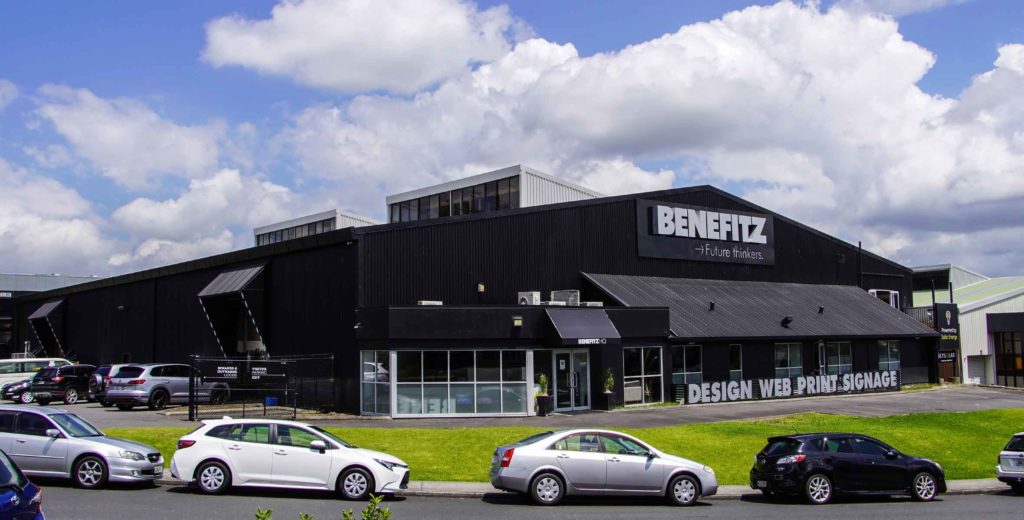 “To equip others for success with quality solutions, premium service and the most versatile visual communications toolkit in New Zealand”
It is my pleasure to introduce you to Benefitz – a New Zealand owned and operated family business, founded in 1988.

For more than three decades we have been innovating, striving for excellence in assisting our customers to communicate. We understand that change is a constant. That we must continue to invest in our people, and in technology to ensure we are providing innovative solutions for our customers. We call this Future Thinking.

We have created our new home using these same principles. Not only are we powered by creativity and innovation, we have also extended our sustainability commitment to be powered by solar energy.
Our Mission Statement captures our purpose. That’s providing a diverse range of products and services that assist entities with their communication – including design, web development, printing, publishing, signage, display and exhibition.
If you are an existing customer, we say thank you. If you are a prospective new customer, we look forward to working with you and earning your business for the long term. That’s our goal.
Aidan Bennett, QSM
Founder and Managing Director

Benefitz was founded in 1988 by Aidan Bennett. He remains Managing Director and the driving force behind the business today.

After completing the cadetship and spending five years at the Herald, Aidan left to travel, then returned to New Zealand to take up a role in sports publishing with Rugby Press Limited. He moved from publishing to a role in Advertising with Graphics Corporate Limited, a company that was eventually acquired by Australian advertising group, Mattingly. Aidan left that business in 1988, deciding it was time to “have his own gig”… Benefitz!

Benefitz Advertising Limited started trading in August 1988 as a one-man advertising business, operating from the premises of the Rugby Press Group – continuing the association Aidan had with that business.

Right from the start Aidan has been supported by his wife of over 35 years, Michelle. Michelle now heads up the finance and administration team at Benefitz, which is now a real family business.

In 1990, Aidan was joined in the business by his brother Dallas, who also remains as a Director and a key player in the business more than three decades on. Dallas trained in engineering and as one of his lifetime passions was sailing he went on to complete an apprenticeship in sail making. Dallas progressed into the sales side of the sail making business before leaving to travel the world, sailing professionally with leading New Zealand helmsman Chris Dickson. As a key mainsheet trimmer, Dallas was on Dickson’s crew that won the World Match Racing title, the Admirals Cup and many other titles around the world during the mid to late 80’s. When he tired of the travelling lifestyle, Dallas decided to return home permanently to New Zealand and went to work at Benefitz.

For the first 7-8 years of business Benefitz was based with the Rugby Press Group, sharing resources and assisting with the production of many of their titles that Aidan had previously worked on when employed by that group. These titles included the weekly Rugby News and many other books and publications.

During this time, Benefitz invested in the first Apple MacIntosh computer graphics technology. This was introduced to the business on the back of Dallas’ technical skills.

Over this period Benefitz came into contact with two people who would go on to play important roles in the business.

Robert Johnson was involved with Benefitz early on, sharing resources while establishing his own print brokering business, Printwize. Robert trained as a printer, before moving into sales and really finding his niche. This was initially in the music industry, before he moved into print sales and decided it was something he could establish a business around. Robert operated Printwize alongside Benefitz for many years before it was merged with Benefitz, at which time Robert became a director and shareholder.

Mike Nolan was employed by the distribution arm of the Rugby Press Group as a teenager in the early 90’s, when he first came into contact with Benefitz. He eventually moved across to work for Benefitz. He went on to learn the business inside-out, working in design and production and then moving into account management and sales, which he proved to be a natural at. Mike became a shareholder and director of the business in the late 90’s, and over 20 years on he is a key player in the business’ success.

Benefitz started out as an advertising and design business. Initially all the manufacturing/printing aspects of day-to-day production were brokered out to other providers. This changed in the mid 90’s when the decision was made to move into manufacturing. Following this move, Benefitz has continued to grow, becoming the most diverse and well-resourced business in the communications industry.

Initially the company got into offset printing by acquisition. An enduring relationship was then established with FujiXerox (now FujiFilm Business Systems) to move into the small format digital printing space. Then large format printing was added. Some years later grand format printing (billboards etc.) was added through acquisition. Along the way flatbed printing technology has been introduced and a sign division was also established in the mid 2000’s.

Benefitz was also an early convert to the online business, establishing a web-development arm to the business in the early 2000s.

Over three decades it has continuously invested heavily in technology right across the business.

A key focus of the business has been in developing a strong brand that is involved in the community. Benefitz is a respected member of the community, gets involved with many not-for-profit organisations and events, and proudly publishes community magazines in its home patch – the North Shore of Auckland, New Zealand.

In 1995 the company purchased its own premises in Taharoto Road, Takapuna, Auckland. These were sold in 2003 and new premises were purchased at 2 Parkway Drive, Mairangi bay, Auckland. That was the home for Benefitz for 17 years through until 2020, at which time – due to growth – the company also leased additional premises at 18 Parkway Drive. The decision was made to sell the head office building and relocate the entire business to one larger location at 5 Parkway Drive – very close to the two existing Benefitz buildings. We loved the central location.

This history piece was updated in late 2021 during an unprecedented time for the world and for Benefitz as a business. In the midst of the Covid-19 pandemic that provided immense challenges due to the health risks, government mandated lockdowns and restrictions. Benefitz shifted its entire business during this period.

BenefitzHQ is an impressive facility. A large empty space provided an open book. With good planning, design and innovation, the large building has been transformed into an efficient production facility for the entire Benefitz business. Everything is under one big roof. Sustainability has been a big focus at the new facility with a massive Solar Power System being a key ingredient – substantially reducing the businesses carbon footprint.

We can assure that you won’t find another ‘Benefitz’ anywhere. This business has been built over a long period and is very special. We have been leaders, not followers, and have developed the business by constantly looking outside the square and doing things differently when needed. We have great people, a great culture, and a range of solutions – many of them unique – that you simply won’t find from a single provider anywhere else. We love our story.

Cant find what you're looking for?

Stay updated with us in our Newsletter!